A literary engineer with a spirit of adventure

For National Engineers Week 2019, we’re sharing stories from some of CTA’s engineering talent to learn more about how they chose their profession and what makes them tick.

What inspired you to become an engineer?

I originally wanted to become an architect, and in high school, I signed up for a polytechnic school in Arizona to learn architecture and engineering basics specific to residential and commercial buildings. My first job was working for an architectural and engineering firm as a drafter under an architect named James L. Plenert III. He saw my willingness to learn and arranged to have me draw details for the engineers. I liked what they were doing and transferred to their department just as the recession hit. When the architectural staff was let go, I was adopted by the engineers. The rest, as they say, is history.

What is your specific area of expertise and why did you choose it?

I have several areas of expertise that have morphed over the years — aspiring architect in 1978, electrical designer in the early 1980s, electrical engineer in the 2000s, and currently project and department manager. In 2000, I went back to college to become a professional pilot and McDonald Douglas DC-10 flight engineer, and I found myself drawn to mechanical systems. Today, about 40 percent of my time is spent on mechanical systems and the rest overseeing the Denver MEP (mechanical, electrical, and plumbing) department and office operations. Tell us something about the field of engineering that is surprising or not common knowledge.

In 25 years of mentoring graduate engineers, the one thing that always comes as a surprise (to the graduates) is that writing skills are just as important as math. Everything we do in our industry involves communicating our design intent to the owner and contractor through both diagrammatic and written methods. I was fortunate to major in anthropology and archaeology, in addition to aviation and engineering — the combination of the former taught valuable writing skills during training for the latter.

What is one of your favorite projects and why?

I enjoy projects where I can combine multiple talents. For example, one of Colorado’s foremost School of Mines once solicited a bid for architectural and engineering services related to an experimental classroom complex built into a mine. Demonstrating my passion for documenting the unknown and with my experience in archaeology, mining, and engineering, we won the job.

The work involved documenting the existing electrical, mechanical, compressed air, communications, and water distribution systems throughout miles of tunnels. I had the entire mine to myself for three days as I created detailed scale drawings of the systems, later transferring the field notes to digital format. The smell of old timbers, the dripping of water, and the hiss of the exhaust system pulling air up an 800-foot shaft to the surface all made the job unique and memorable. Greg looking at home in the Edgar Experimental Mine.

What piece of advice would you give a young person interested in becoming an engineer?

Explore and investigate why things are, and don’t be afraid of failure along the way. Failure is just part of the process. Someone once said, “You can see a lot with your eyes,” and this is true, but you first have to be looking.

Greg at a glance 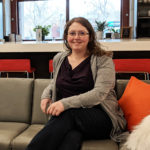