When the coronavirus (COVID-19) pandemic struck, some of the “behind the scenes” first responders were engineers. Given our team’s work in healthcare design for clients such as Billings Clinic, Bozeman Health, and SLC Health/St. Vincent, our mechanical engineers were tasked with developing solutions for air circulation and ventilation in patient and operating rooms to prevent the spread of airborne infection. With so many unknowns about COVID-19, it was critical to provide areas where patients with the virus could be treated without risk of transmission to other areas of the hospital.

To learn more about one of the solutions — converting standard neutral pressure rooms to negative pressure — we sat down with Shawn Murray who leads our mechanical engineering group.

Tell us about negative pressure rooms. What are they? Why are they important? And why were they needed in response to the pandemic?

Negative pressure rooms are designed to contain a patient’s breathing within the room, helping to prevent the spread of airborne viruses and disease. When a patient who is suspected to have, or is diagnosed with COVID-19, the availability of rooms like these becomes critical to protecting other patients in the hospital.

Ideally, patients with COVID-19 would be treated in airborne infection isolation (AII) rooms designed to ASHRAE 170 guidelines; however, the number of these types of rooms are limited in most hospitals today, which creates the need to convert existing spaces. AII rooms have a lower air pressure within, thus air flows into the room not out. Anterooms (small areas adjacent to the AII rooms) serve as an extra barrier to help isolate pathogens. Air from these rooms does not recirculate into other areas of the hospital and is exhausted via dedicated ductwork where it is diluted in the atmosphere. In response to the projected COVID-19 cases, standard patient rooms needed to be quickly converted to negative pressure.

Is this type of work something the Cushing Terrell team has done before?

We’ve designed both negative pressure and positive pressure rooms, but this was the first time we faced the need to convert so many standard patient rooms into negative pressure rooms at one time. The work had to be done quickly, so we collaborated closely with Billings Clinic facility staff at night and over the weekends to assist them in converting 100 patient rooms into negative pressure isolation rooms. We re-engineered, air balanced, and specified new supply and exhaust airflow for several bed floors in the hospital. It was vitally important to reconfigure enough rooms on the ICU floor where the intubation and extubation of ventilators for critical patients could create the highest risk for transmission to other areas of the hospital.

Going into some of the details: Dampers on the central air handling units were overridden such that all air coming back to the main fans was exhausted to the outdoors, thereby converting all patient room inlet air grilles into exhaust grilles. Inlet air grilles at nurse’s stations and corridors were blocked so that additional exhaust air could be taken from the patient rooms. This helped create a positive flow from the caregiver area into the patient rooms. In addition, door sweeps were installed on the patient room doors to increase the pressure difference between the rooms and corridors.

The new configuration allows for four modes of operation:

What was the biggest challenge in executing this work?

The biggest challenge was timing and the potential scenario of a patient with COVID-19 needing surgery. We met with the surgical team to develop a plan in the afternoon and worked through the night to implement an adaptable system for two of the hospital’s operating rooms. Our goal was to protect both patients and hospital staff.

A large concern that remained was what would happen if a patient needed to be intubated or extubated in the operating room. To address this procedure, we installed a wall switch in the operating rooms that communicates with the existing control system, switching the air-pressure set point from positive to negative. To achieve negative pressure, the supply airflow in the room is slightly reduced from the existing VAV (variable air volume) box when the wall switch is in the negative position. The new wall switch gives surgeons the ability to change between positive or negative air pressurization, depending upon the specific situation. Instead of moving patients to a different room to accommodate the situation, they could alter the condition of the room itself.

What was the overall result of this work?

Our client is now equipped to safely handle operations for COVID-19 patients should the need arise, without the loss of a standard operating or ICU room. In addition, our team of mechanical engineers had the opportunity to re-evaluate what possible HVAC solutions exist that we could re-configure, not only for healthcare environments but also for all built environments to help prevent the spread of an infectious disease like COVID-19.

Did you use any new technologies, systems, or approaches?

The technologies and systems utilized are not new; however, this particular configuration with the ability to switch between positive and negative pressure, as well as the need to quickly re-purpose spaces is new. With the current pandemic acting as a catalyst, we believe we’ll be seeing a lot more demand for improved and adaptable systems like this one. COVID-19 operating suites need to be engineered, and most hospitals don’t have these right now.

What big picture learnings can be applied to other building types/markets?

With what we’ve learned and experienced so far as a result of the pandemic, a reliance on untreated recycled air will likely become a thing of the past. Our team, and I suspect other mechanical teams, will continue to develop ways to reduce the risk of disease transmission through a combination of elements such as incorporating thoughtful clean-to-dirty airflow paths, emerging particle reduction technologies, and dilution ventilation. We’ll also see more research and application of filtration technologies, such as bi-polar ionization, and UVGI (ultraviolet germicidal irradiation) to reduce virus transmission.

While the circumstances are very unfortunate, we welcome the opportunity to re-evaluate how to make our built environments safer and more resilient. These technologies and systems that reduce viruses, bacteria, allergens, odors, and other particles will become increasingly important, not only in healthcare facilities, but in all public buildings and facilities.

A principal at Cushing Terrell, Shawn Murray has more than two decades of experience as a mechanical engineer with a history of HVAC design work for the construction industry. Shawn leads a team focused on designing HVAC systems that are simple, energy efficient, cost conscience, and meet the unique needs of each project and client. His experience is multi-market, comprising the design of systems for healthcare, education, commercial, and government clients. 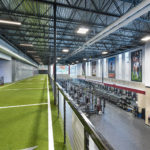 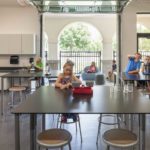